What elements should you consider when designing a citizen security program? Christina Schultz provides suggestions in her paper for a comprehensive approach to combating crime and violence.

In response to increasing security challenges worldwide, the international donor community is placing greater emphasis on citizen security programming. Citizen security can be defined as “the process of establishing, strengthening and protecting democratic civic order, eliminating threats of violence in a population and allowing for safe and peaceful coexistence.” As one example, the U.S. government strategy for addressing security threats in Central America, known as the Central America Regional Security Initiative (CARSI), experienced a 1,250 percent increase in funding over an eight-year period — from $60 million in fiscal year 2008 to $750 million in fiscal year 2016. After all, for the average citizen, security is a quality of life issue and influences nearly every aspect of our daily (and nightly!) actions. For those vulnerable groups who suffer disproportionately from crime and violence, this reality is even more evident. Programs that are comprehensively designed from the outset are more likely to have greater impact in solving this complex problem and will provide a better return on donor investment.

Below are the first three out of eight considerations that can be used not only for citizen security programs, but can be incorporated into economic development, education, health, and environmental management programs where addressing crime and violence is a factor. For all eight considerations, read the full paper.

How to Design a Citizen Security Program

When taking those first few steps to design a program, component, or cross-cutting theme that aims to address crime and violence, here are the first three factors to consider.

Walk through any city and it is evident that the environment is not the same block after block, street after street. Some blocks have more houses, apartment buildings, or businesses; some streets are better lit; some neighborhoods have more foot traffic or car traffic. Assumptions about crime and violence cannot be generalized across an entire city. Collecting quality data that provides details on places, groups, and behaviors helps build a territorial profile of crime and violence. It may be that some types of crimes are more frequent than others or that violence occurs more often during certain times of the day than others. Once analyzed, this information can then be used to develop targeted strategies and evidence-based programming for improving citizen security. 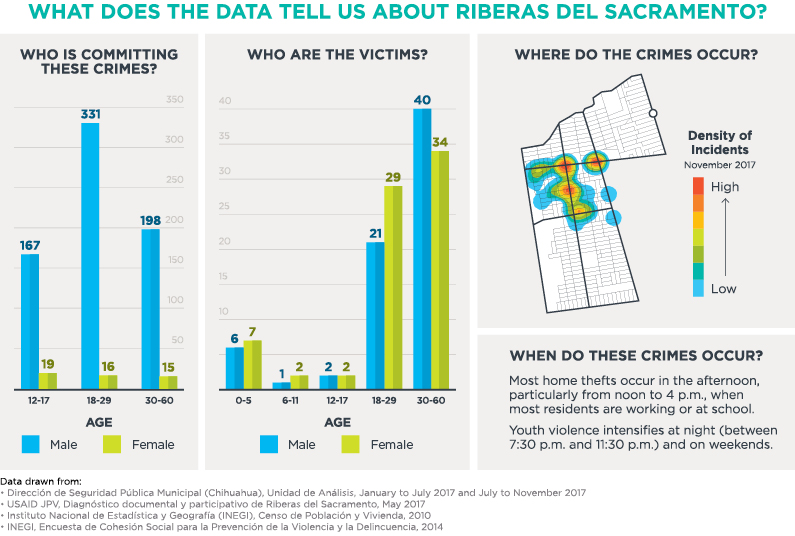 2. Identification and Coordination of Stakeholders

When one thinks of government addressing crime and violence, the first thought is likely the local police department. However, the security system is just that — a system. Like any system, it encompasses a broad range of actors. In addition to law enforcement, citizen safety also relies on justice institutions and management and oversight bodies. And like any healthy, well-functioning system, coordination between different parts of the system is key. When each institution understands and respects the others’ roles and the interrelationships among them, the groundwork is laid for a collaborative approach to governance of the security sector.

We must not forget citizens themselves within the security system. If we think of them as merely recipients of security services, we miss the opportunity to include them in joint efforts to identify problems and implement solutions. Of course, the best way to deal with crime and violence is to avoid them in the first place. Prevention requires that law enforcement understand what is going on in a neighborhood. And nobody knows the local conditions and priority needs better than the residents who live there. The success of citizen security programs depends on the system’s legitimacy and mutual trust between communities and their government.

It’s not enough to know where crime and violence is occurring, who the players are in a security system, and what they do. It’s also important to understand why and how these actors operate — both the dynamics of their behavior and their capacity to fulfill their mandates. Why institutions behave the way they do and what motivates them is driven by a number of factors, such as power relations, social underpinnings, and incentives. Complementing this is an awareness of the technical and management capacity of an institution to deliver citizen security services effectively. Put more simply, can and will an institution do its job to protect citizens? Citizen security program design must examine actors’ political and social motivations, as well as their abilities, systems, and the legal and institutional frameworks that govern their mandates.

To learn more about these three elements as well as the other five — public policy; allocation of resources; strategies, methodologies, and tools; accountability; and monitoring, evaluation, and learning — read the full paper.

There is no one-size-fits-all approach to combating crime and violence because each country, city, and neighborhood contexts differ. Their particularities will also determine how much weight is placed on each factor. Nevertheless, taken together these considerations have proven crucial in building an integrated strategy when developing programming to improve the safety and security of communities and vulnerable groups.

Read the full paper, Citizen Security Programming 101: What to Consider, for more information.

Christina Schultz has more than 20 years of experience in democracy and governance programming in Latin America, Africa, the Middle East, and Afghanistan. Her experience ranges from demobilization and reintegration of ex-combatants in Angola to improving public service delivery and resiliency in post-conflict zones in Colombia and addressing food insecurity in Syria. As a director…

In the first blog entry in this series, More than Pipes and Pumps: Good Governance Drives Improved WASH, we describe how governance is central to meeting the challenges that rapid urbanization poses for provision of water, sanitation, and hygiene (WASH) services. In this entry, we focus specifically on how improved WASH governance can enable technological innovations,…

We live in an increasingly urban world with infrastructure and essential services struggling to keep pace. From the current level of 56% in 2020, the United Nations (UN) projects that 68% of the world’s population will be urban by 2050. Many of the world’s fastest growing populations over this period are projected to be rapidly…

Introduction of key concepts and Jordanian context Municipalities own many assets that residents and businesses depend on for critical services. We all rely on drinking water which is treated and flows through municipal pipes to our homes. We depend on our trash being collected and disposed of in the municipal landfill, and the trucks that…

Supporting Mozambican citizens to participate in policymaking and the design of public services can improve the effectiveness of state systems and services.

To curb corruption in Peru, the public and private sectors must partner to improve investment processes.

Addressing root causes of violence in Mexico is key to reducing crime and restoring citizens’ trust.

Cycles of violence in Mexico continue to take a toll on civilians, necessitating greater accountability in Mexico’s human rights system.

To reduce crime and violence in Honduras, communities need resources and governmental support that ensure citizen security in the areas of greatest need.

With better partnerships across the government and civil society organizations, Mexico can improve the way it targets crime and violence in vulnerable communities.

Development programs worldwide are designed to protect vulnerable people, places, and livelihoods from climate change, but with smarter methods, these programs could be even more effective.

The Land Innovation Fund for Sustainable Livelihoods supports innovations that will make the soy supply chain sustainable and deforestation-free.

In Colombia, hundreds of youth are reclaiming peace by promoting a culture of human rights in communities recovering from conflict.

The Cost of Not Adapting

A recent assessment of the economic impact of climate change in Indonesia highlighted the major environmental, economic, and health challenges that the country will face from now to 2050.

Effective governance underpins equitable and efficient service delivery. Explore how developing new and improved methods of governance is critical to addressing the growing challenge of urbanization.

In a rapidly urbanizing world, how can cities improve governance to meet the water, sanitation, and hygiene needs of their growing populations, particularly the most vulnerable?

Sharp increases in population growth globally are stretching local governments tasked with providing services to their constituents. How can municipalities pay for this dramatic increase in service and the infrastructure needed to attract new businesses and spark local economic development?

How to Conduct Applied Political Economy Research in a Pandemic

Chemonics' Center for Politically Informed Programming offers five tips for overcoming the limitations of remote fieldwork to get the most out of applied political economy analyses.

How can we equip teachers to support student literacy in the midst of global and regional uncertainties? Fred Kasongo reflects on the ACCELERE!1 project's training-of-trainers activities designed to strengthen early grade literacy in Eastern DRC, despite COVID-19, Ebola, and armed conflicts.

Chemonics’ senior director for global health talks about his background, why strengthening health systems is so critical, and how quality improvement can enhance health outcomes and lead to better health for all.

Voices from Our Projects: Critical Skills for Private Sector Engagement

Experts from our projects across Latin America offer tips and insights about critical skills needed for effective private sector engagement.