Governments around the world, from the national to the village level, have been devising, implementing, and regulating innovative tools, like payment for ecosystem services and sustainable production certifications, to combat and adapt to environmental problems like climate change and deforestation. However, despite these innovative tools, sub-national governments face a daunting challenge: They are often responsible for achieving national environmental goals, but rarely receive adequate funding for their efforts. Nature conservation typically represents a cost and, in many instances, means foregoing more profitable uses of natural resources for economic activities that generate revenues in the short-term. In addition to this trade-off, local governments could be further dissuaded by the potential “free-riding” off their conservation efforts, where neighboring jurisdictions – and even other countries – benefit from the services provided by nature without having to pay for them. For example, a healthy forest upstream can improve water quality for communities downstream.

Indonesia is one such country where economic development has been prioritized by sub-national governments over nature conservation. With the country’s democratization and decentralization processes over the last couple of decades, local governments gained greater autonomy, enabling them to make contextually appropriate decisions, but also driving them to become more revenue-oriented to meet their financial needs. With decentralization, the central government allowed sub-national governments to retain a greater share of produced fiscal revenues to meet their needs. For example, the Indonesian government redistributed timber royalties, increasing the sub-national share to 80 percent. As a result, sub-national governments justified the exploitation of forests and other natural resources to generate revenues and drive economic development at the expense of local, national, and global conservation interests.

A partial solution to the difficult compromise between nature conservation and economic development for local governments is the use of ecological fiscal transfers (EFTs). EFTs are a type of intergovernmental fiscal transfer (IGFT), but with a conservation or ecological purpose. While the goal of a traditional IGFT is to compensate sub-national jurisdictions for public infrastructure and service provision, EFTs compensate for biodiversity and ecosystem service provision. Although IGFTs have been active in Indonesia since the early 2000s, EFTs are a more recent development with different levels of transfer – national to provinces, districts, or villages – currently being piloted. As presented at this year’s XV World Forestry Congress in Seoul, the Build Indonesia to Take Care of Nature for Sustainability (BIJAK) project – a USAID-funded activity implemented by Chemonics to improve land use governance, reduce wildlife trafficking, and strengthen conservation area management – drove this innovative mechanism onto the national and regional political agenda between 2016 and 2021 through an EFT assessment and improvement process. 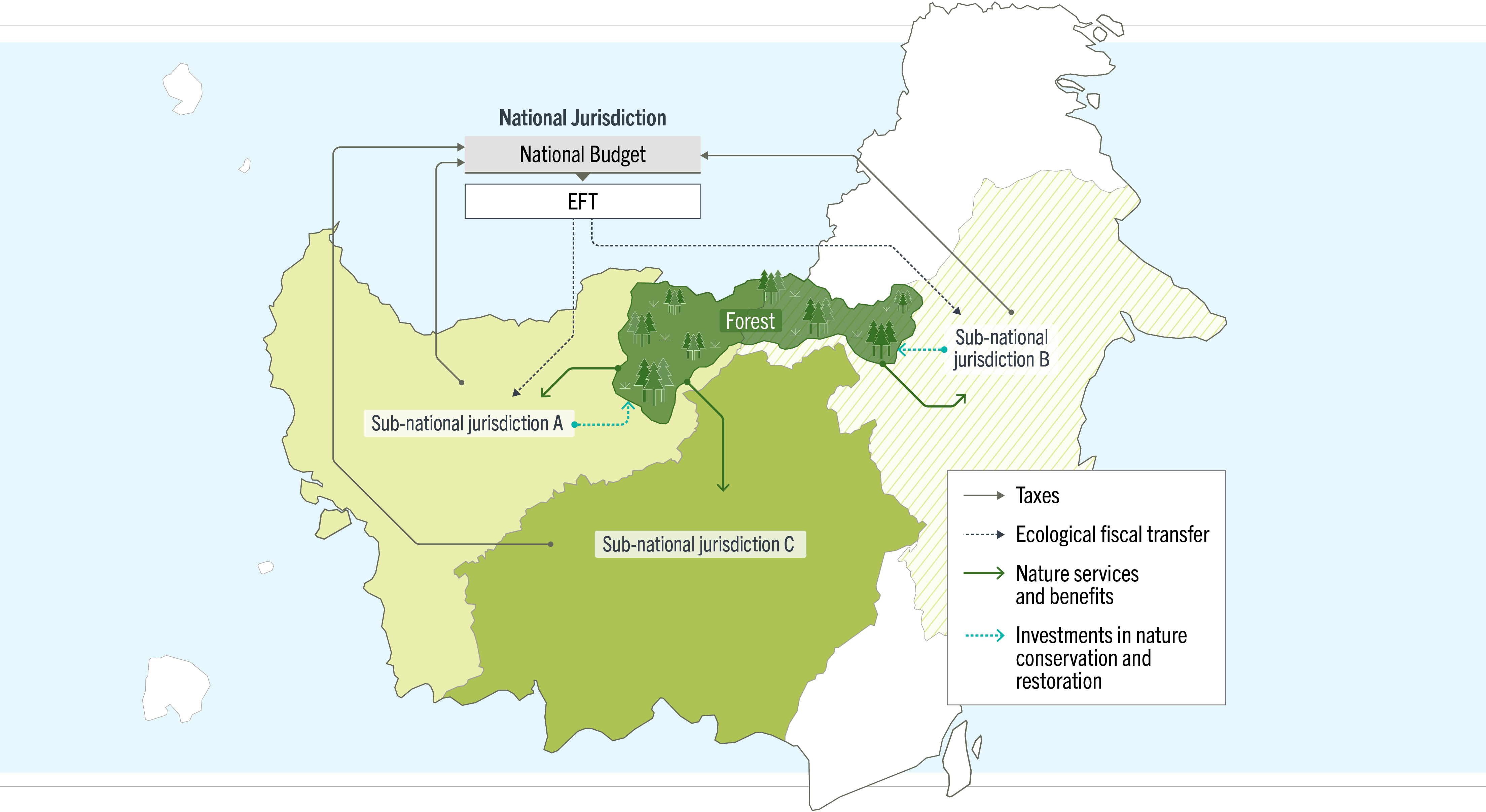 Underlying logic of ecological fiscal transfers by Loft, Gebara, and Wong (2016), licensed under CC BY 4.0 International. Adapted from original by Chemonics International.

Opportunities and Challenges of Using EFTs for Conservation

Based on BIJAK’s experience testing the potential use of EFTs to incentivize nature conservation, as well as other examples from Indonesia, we have identified some key opportunities and challenges to consider for implementation and replication of this mechanism in different contexts.

The benefits of EFTs include:

However, EFTs also present important challenges that must be carefully considered before being implemented:

Scaling Up the Use of EFTs

If we are to halt deforestation, restore degraded lands, and sustainably use forests, all funding sources will be required –government, private, and official development assistance. EFTs have been implemented in very few countries to date, mostly in Brazil, Portugal, France, China, and India, but they are proving to have enormous potential: Currently EFTs amount to 20 times the global official development assistance for forestry and their value is expected to grow even further, although their net impact on nature and livelihoods is yet to be determined. Despite the challenges, EFTs can be used as simple mechanism to encourage nature conservation and restoration while promoting environmental governance decentralization. Furthermore, EFTs are a public sector instrument with the potential to enable the success of other forestry conservation and restoration mechanisms, namely Reducing Emissions from Deforestation and forest Degradation (REDD+).

Banner image caption: Woman in Indonesia. The photo was taken by the Indonesia BIJAK project.

In this “Perspective” post, Marvie Javed, a senior specialist in Environment and Natural Resources at Chemonics who is based in Lahore, Pakistan, reflects on the recent flooding in the country and considers the following question: What are some immediate actions that climate experts and development practitioners can take to help protect vulnerable communities and to…