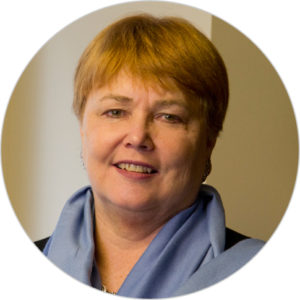 On Tuesday, October 15, 2019, Chemonics’ president and CEO Susanna Mudge participated in Foreign Policy’s global women’s summit, “Her Power: Global Voices, Global Impact.” Co-hosted in partnership with the Inter-American Commission of Women of the Organization of American States, the Inter-American Task Force on Women’s Leadership, and the International Monetary Fund, the summit convened professionals across a wide range of industries to discuss experiences and approaches for combating barriers that constrain women’s potential around the world.

Ms. Mudge participated in a panel titled Women as Change Agents – Building More Inclusive Industries, which discussed best practices to create more inclusive organizations and the factors that facilitate women’s access to male-dominated industries. She was joined by panelists Kathryn Kaufman, managing director for Global Women’s Initiatives at the Overseas Private Investment Corporation, and Alexandra Solomon, senior research analyst for ethics and human rights at the Foundation for a Smoke-Free World. The panel was moderated by Foreign Policy’s managing editor Ravi Agrawal.

When asked to share important lessons she learned about advancing women’s leadership roles, Ms. Mudge emphasized the importance of mentorship, being an ally, and “tapping” women for opportunities. She discussed the importance of leaders deliberately identifying and encouraging women to advance their positions. She also stressed the power of being a role model.

“A couple of weeks ago, I had the opportunity to travel and visit our teams in Lebanon and Tunisia. Unintentionally, I was traveling with a group of four women leaders. I’m still today receiving feedback from our female employees about how powerful that was to them. We cannot underestimate even that visual, but more importantly the responsibility that it brings,” said Ms. Mudge.

Ms. Mudge became the company’s fourth president and CEO in 2013 and is the first woman to serve in this position since Chemonics was founded in 1975. Since assuming the role of president and CEO, she has led the company in a concerted effort to facilitate leadership growth. Under her guidance, the number of women in the executive team has grown to almost 50 percent — a twofold increase since 2016. “There is nothing that is as powerful as when you have a diverse group that is serving in very critical roles,” she explained.

With such advances in mind, Ms. Mudge also discussed challenges women continue to face on the road to leadership, particularly women of color. “That is an area where we must continue to work to have the widest representation of culture, ethnicities, and gender,” she said.

Ultimately, achieving these goals is about fostering an environment where people can see themselves as leaders, regardless of their gender, ethnicity, or cultural background. At Chemonics this effort is guided by a deliberate commitment to a broader diversity and inclusion strategy at the company, which seeks to embed diversity and inclusion in all company regulations and activities to establish a diverse, fair, and flexible workplace, Ms. Mudge explained.


Chemonics Listed Among “Best Places to Work for Disability Inclusion”

Chemonics is honored to announce that it earned a top score in the 2021 Disability Equality Index® (DEI), the world’s most comprehensive benchmarking tool for the Fortune 1000 in measuring disability workplace inclusion. Chemonics’ designation as one of the “Best Places to Work for Disability Inclusion” was announced Tuesday, July 13, at the Disability:IN Annual Conference Inclusion…

Chemonics has launched a Sexual Harassment, Exploitation, and Abuse (SHEA) Prevention and Response Toolkit to help the development community protect people from sexual assault and to engage organizations in working and learning together to share best practice and important lessons in SHEA. The free, open-access toolkit provides organizations with a step-by-step guide on how to…

As the government of Mexico implements its National Human Rights Plan at the federal and state levels, it must address structural challenges to human rights and enhance its dialogue with civil society organizations.

Fostering the Growth of Salvadoran Small and Medium Enterprises

Nigerian citizens need more tools and resources to learn how to productively contribute to reform at the local, state, and national levels.

In Kosovo and Vietnam, the World Bank’s Doing Business Report is providing a framework that helps governments reshape the private sector’s role in advocating for and promoting economic growth.

Micro- and small enterprises are receiving training to expand their businesses, thanks to a new international partnership.

Chemonics Listed Among “Best Places to Work for Disability Inclusion”

In the current racial climate, organizations are wondering how to deepen efforts for racial equality. In this article Victoria Cooper shares four goals for leaders seeking to build a more equitable, inclusive organization.

Following Menstrual Hygiene Day (May 28), Dr. Jordene Hale and Nausheen Rajan reflect on how to combat the stigma and inequities surrounding menstruation.

While there is no one-size-fits-all approach to implementing diversity and inclusion programs, these five guiding questions can help your organization get started.

Empowerment at Your Doorstep: The Case of WEinSPIRE in Pakistan

For a variety of reasons, promoting women's economic empowerment in Pakistan can be challenging. One project developed a creative solution.